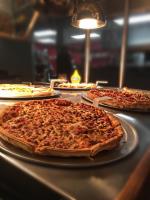 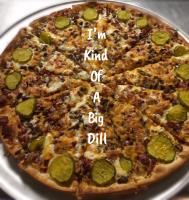 In 1967, Chuck Herold opened Pizza Inn at 3821 N. Sterling Avenue in Peoria, Illinois. He received Liquor License #41 in Peoria City. Pizza Inn quickly became a staple in Peoria’s Sterling Plaza. The Herold family owned and operated Pizza Inn until 2013 when it was sold to another Pizza Franchise.

In early 2018, planning began for turning the former Pizza Inn (also known as PI) into another Herold Family restaurant. In April of 2018, Chris Herold, Shawn Herold and former Pizza Inn Manager Zack Johnson (though not related by blood, is Family) became partners and began renovations on the site. Pictured above is the day they signed.

The name Tavern41 is a shout out to Chuck Herold’s legacy. Tavern 41 retains Liquor License #41. Though the inside has been completely updated, returning customers will recognize the fan favorite menu items that remain. Chris, Shawn and Zack appreciate the legacy, traditions and memories of PI and have made a conscious effort to incorporate them into Tavern41.

The buffet will be open for lunch Monday thru Friday. The kids arcade wall is back and better than ever! (Pac Man, Pin Ball and more) They have Vegas Casino carpet in the adult gaming room.

There are no reviews for Tavern 41. Write a review now.