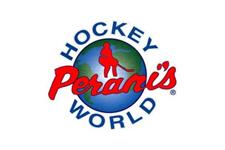 Perani's Hockey World ("The Toystore For The Hockey Player") was formed in Flint back in 1976 by Bob Perani, a local Pro hockey player and fan favorite who played for a number of years as a goalie with the Flint Generals. Over the past 30 years the company has grown to include 22 retail stores in North America, and our web and catalog company has grown to one of the largest in the country.

There are no reviews for Perani's Hockey World. Write a review now.