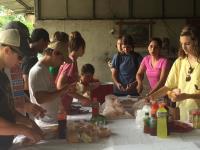 Middle Tennessee Christian School was organized in 1960 and received its charter from the State of Tennessee on December 9, 1960. The purpose given in the charter was: “The building and maintenance of a school and or schools to provide educational opportunities . . . particularly the teaching of the Bible; to provide a minimum of one class period per day of instruction in the Bible as the inspired Word of God for every child enrolled and to emphasize the Bible in every course taught; to provide for Christian influence and environment in every phase of the school’s activities.” A twenty-five acre campus was purchased on Lebanon Road near the airport. After incorporation, modern brick buildings were constructed. The first students were accepted in the fall of 1962. MTCS operated as an elementary school with kindergarten through eighth grade until 1975.
At that time the Board of Directors made thedecision to add one grade a year until a high school was complete. The first senior class graduated in May of 1979. An eight classroom addition was constructed for the high school in 1978. Ten more classrooms and the high school offices were added in 1995. Thirteen acres at the north end of MTCS Road were acquired in 1999 for the development of baseball and soccer fields. The Charlene Waldron Library was built and dedicated in 2001. A building located at 204 MTCS Road was purchased in 2004 for the pre-school program. In 2008 a new state of the art gymnasium was built. MTCS was approved at its inception by the Tennessee State Department of Education. In December of 1978, we received full accreditation by the Southern Association of Colleges and Schools. Legal ownership of MTCS is vested in a self-perpetuating Board of Trustees composed of persons who are members of Churches of Christ.

There are no reviews for Middle Tennessee Christian School. Write a review now.